THE HISTORY OF BRANOM INSTRUMENT CO. 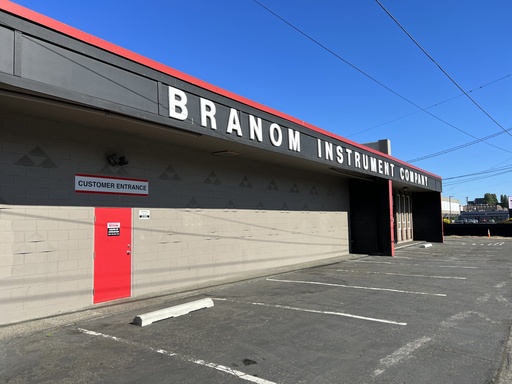 Branom Instrument Co. was founded on January 1, 1947, when as a young accountant, Ray Branom and his wife Vera decided to take their life’s savings and purchased a half interest in a small industrial instrument company that dabbled in war surplus and process instruments. The $2000 they had painstakingly saved over 10 years’ time was a large amount of money in those days (a new house cost around $5,000); yet by then, Mr. Branom had some experience with the instrument industry and was inspired to become a partner in his own company.

Mr. Branom was introduced to the instrument industry due to the requirements of World War II. After graduating from the University of Idaho in Moscow with a BS degree in Accounting, Mr. Branom had come to Seattle to earn his MBA at the University of Washington. The war, however, sent him to the shipyards, where he was placed in the Instrument Test Engineering Group.  After the war, Mr. Branom decided that he liked the instrument business, and secured a job as a salesman for the Instrument Laboratory in Seattle. After a while, another company, Instrument Sales, Inc. learned about Mr. Branom and felt he would be a major asset and courted him.

Mr. Branom, now a full partner, immediately implemented his philosophy and sales strategy. Mr. Branom always stated that the three most important aspects of any business can be expressed simply: Service, Service, Service. He believed if you want people to buy your product, you must be there in person to demonstrate it and you must gain the customer’s trust by providing the best possible product along with the best possible price and service.

Mr. Branom also introduced the then-brand-new concept of vertical marketing. Previously, sales were conducted only on a geographical basis. Mr. Branom, however, realized that specialized market segments required specialized skills and training, and made sure that the salespeople were given either market segments or geographic territories. To this day, this has proved to be the company’s most successful strategy.

In July of 2018 Branom Instrument Co. was acquired by new owner and CEO Mike Lauer. Mr. Lauer had a long-running interest in the measurement, control, and automation industry. Also, he held aspirations of leading a company in which he had a significant ownership interest. Mr. Lauer was drawn to Branom Instrument Co. because of its trusted reputation in the industry. Moving forward under Mr. Lauer’s leadership the team at Branom will still adhere to Ray Branom’s original philosophy that the three most important aspects of any business can be expressed simply: Service, Service, Service.

Branom Instrument Co. always strives to implement the basic business philosophy of fairness, whether in dealing with employees or customers. Doing what is fair and right has inspired tenured loyalty with both employees and customers and is one of the hallmarks which place Branom above its competitors.

The Branom Instrument Co. also believes in sharing the wealth of its profits with the employees, customers, and shareholders. Customers receive the best products at the best prices and the best service possible, and the employees are fairly compensated and rewarded for their efforts. In fact, the majority of the company’s profits are routinely put back into the company for raises, benefits, and increased stock and capabilities. 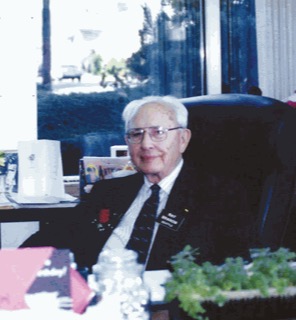 Ray was born November 20, 1917, in Bonners Ferry, Idaho to William Wiley and Annie Lee Branom. He played football at Bonner’s Ferry High School for his older brother, Coach Duncan D.B. Branom. He went to the University of Idaho on a football scholarship and graduated in Accounting in 1941.

On June 22, 1941, Ray married his sweetheart Vera Lee. For their honeymoon, they came to Seattle, where Ray went to the University of Washington to get his Masters while working at a Chevron gas station. When World War II broke out, Ray went to work at the shipyards and was introduced to instrumentation. Having saved for a new car, Ray and Vera decided to invest that money in a risky venture. This was a momentous decision since by 1947 the family had grown to include the first half of his six children. Ray took the family savings and became a partner in a business called Instrument Sales and Service. In 1949, due to the death of the original partner, Ray became the sole owner. 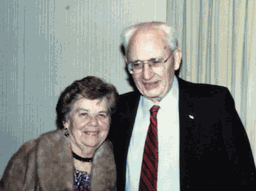 Ray was a businessman and an avid sports fan. He was a life-long season ticket holder for the Huskies, Mariners, Seahawks, and Sonics, and loved going to the games. He held several positions, including President, of his Kiwanis Club.

Ray is survived by four of his six children: Duncan, Bob (wife Nancy), Sue Warter (husband Brad), and Jeanne Branom, thirteen grandchildren and seven great-grandchildren. One of his granddaughters, Shauna Kay Warter, passed away in 2002. Ray’s loving wife and sweetheart for 64 years, Vera Lee, passed away on February 19, 2005. Two of his sons, Steve and Bill Branom also passed away – Bill in 2009 and Steve in 2013. One of his daughters-in-law, Carolyn Branom, passed away in 2012. 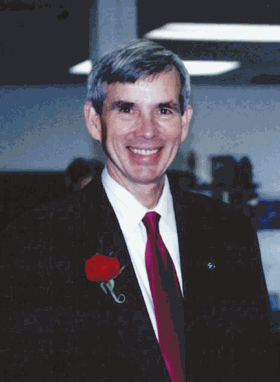 William W. (Bill) Branom, loving husband, father, and grandfather was born Oct. 15, 1945, in Seattle, and died Feb. 20, 2010. He was a prominent business owner, Jefferson Award nominee for years of community service, and a veteran of Cold War military service.

Bill, the third son of Ray and Vera Branom, presided as CEO and President of Branom Instrument Co, an industrial instrumentation business founded by his father. He grew the company to expand throughout the Northwest, Alaska, and California and served as former Seattle president of the International Society of Automation (ISA).

Bill graduated from Seattle's Lincoln High School in 1963 and received his B.A., M.A., and Ph.C. in Germanic Languages and Literature from the University of Washington.

In 1968, he married his high school sweetheart, Mary Koss. From 1969-1972 they lived in Munich, Germany, where Bill served in US military intelligence, attached to the Bundesnachrichtendienst (German Intelligence Agency), and was involved in secretive, Cold War espionage-related work, which was only recently revealed in his "Memoirs of a Cold Warrior."

An avid sports fan, Bill attended Husky football games, supported Husky athletic programs, including basketball and UW club ice hockey, for which his son played goalie. He was a great fan of the Sonics, Seahawks, Sounders, and European soccer, particularly the German Bundesliga and Bayern Munich. He enjoyed playing amateur league soccer and basketball, and soccer with his children, which he dubbed the "Branom World Cup."

Bill devoted his life to community service and was first recognized in high school with the Rotary Club Service-Above-Self Award. He served others through countless volunteer projects with the Industrial Kiwanis Club of Seattle and was recognized for his work as President, Treasurer, Newsletter editor, and Division 26 Lt. Governor. He devoted 20 years to mentoring young people of Cleveland High School's Key Club as their advisor, helping beyond the call of duty and inspiring them to serve their community. He also supported the Salvation Army Rehabilitation Center in many ways, spearheading programs for Christmas gifts for Center residents, and Bell-Ringing in downtown Seattle. Every year he organized donations of turkeys for the Seattle Milk Fund, together with canned food collected by his Key Clubbers for Thanksgiving food baskets for needy families. He included information about Thanksgiving in a variety of foreign languages with the baskets for immigrant families. Bill supported the Germanics Dept. of the UW and the Seattle German Language School, including as School Board President. Bill also served as an Elder for Messiah Lutheran Church.

Bill devoted so many volunteer hours over his lifetime and financially supported over 200 causes locally and globally because he genuinely loved people. He was generous, kind, always wanted to help others, and was in the process of planning upcoming projects. He was greatly loved in return. He had been an intrepid warrior, but in December 2004, he began the most difficult battle he would face: stomach cancer. He eventually lost that battle, but his inspiring spirit lives on in the hearts of everyone he met. He was preceded in death by his parents (Ray & Vera) and parents-in-law (Ruth & Carl Koss), mourned by his loving wife, Mary, and children Mark (& Susy), Jonathan (& Tammy), Christina, and Robert Branom; siblings Duncan, Bob (& Nancy) Branom, Susan (& Brad) Warter, and Jeanne Branom; also brothers-in-law Noel (& Linda) and Tim (& Kathy) Koss, numerous nieces, nephews, and cousins.

Chairman of the Board and Legal Counsel

Steve was born on December 13, 1943, to Ray and Vera Branom. He grew up in the Greenwood neighborhood of Seattle and attended Lincoln High School. He then went to college at the University of Washington in Seattle and pledged Sigma Alpha Epsilon (SAE). He met his future wife, Carolyn Cozart when she became an SAE Little Sister of Minerva. Carolyn and Steve were married on July 30, 1966, in Chelan, WA. Steve graduated with a Bachelor of Science degree in Political Science in 1966 and went on to attend the University of Washington Law School and graduated with a Juris Doctor degree in 1969.

Steve began his legal career in 1970 as an Assistant Attorney General for the State of Washington. He spent the majority of his profession as an attorney for Hackett, Beecher, and Hart, a Seattle law firm where his areas of practice ranged from civil litigation, insurance coverage, and mediation. In a career spanning more than 40 years, he tried hundreds of cases, in 27 of Washington's 39 counties. Steve received Martindale-Hubbell's highest attorney rating. As a mediator since 1988, he brought a wealth of experience to the table and an excellent settlement rate of 90%. He is listed in the Washington Law & Politics edition of "Who's Who in ADR." Steve Branom served as Chairman of the Board and Corporate Counsel for the Branom Instrument Co., which was founded by his father, Ray Branom in 1947.

Steve and Carolyn raised their two daughters, Stacey and Sara in Issaquah. They moved in 2010 when he retired from law and they spent their time between their Belfair, Hood Canal, and Palm Desert, CA homes with their friends and family.

Along with his wife Carolyn, Steve was a huge Husky fan and they had been Tyee members since 1981. They held impressive tailgating parties with friends and loved supporting their Alma Mater. Steve was the bartender at these events and made a mean Bloody Mary.

Steve enjoyed many hobbies over the years including salmon fishing in Alaska, golf, and flying. He became a pilot in his 30s and owned several single-engine Cessna planes.

Throughout their lives, Steve and Carolyn were often with their friends having fun, enjoying good food and wine, taking trips all over the states and world, and in the end leaving great memories behind.

Steve was a wonderful man who was deeply loved and respected by all who knew him. He always had a ready smile and laugh and truly loved people and lived life to the fullest. We all miss him and will never forget what an amazing son, brother, cousin, husband, uncle, father, friend, and person he was.